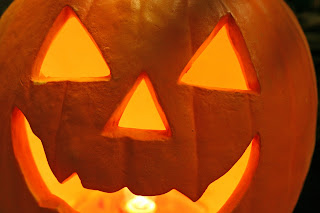 
When I was a kid, Halloween was almost my most favourite time of year. I planned my costumes months in advance and my mother, saint that she is, dutifully handmade each of our costumes (all four of us) year after year. Some of my past favourites were Scarlett O’Hara (during my Gone with the Wind obsession, winning top costume at school) and my sister’s outstanding chicken costume, complete with individual “feathers” hand-sewn on all over it and yellow stockings.
As a young adult, Halloween still held that fascination for me. I looked forward to crazy Halloween parties and late night screenings of the Rocky Horror Picture Show at our local cinema, pieces of toast ready for the tossing. Now that I have kids of my own you would think I’d be psyched for this pagan-turned-commercial holiday.
I face Halloween with dread every year. I’m no Martha Stewart and it seems as though the “sewing gene” was not passed down to me from my mother. I always feel like I'm letting my kids down. I will put up the meager decorations (this year: a Halloween wreath, skull LED lights, “spider webs” around the front porch) but my heart is never in it. Perhaps it’s that the holiday has become too commercialized. It’s Christmas on crack. Our society has gone over the top with the decorations and costumes. No longer can a kid go out in his father’s old jacket and tie and pencilled-on stubble. One has to truck over to the local fly-by-night Halloween superstore to drop a bundle on tacky, flimsy and overpriced “flavour of the year” costumes. One jack-o-lantern with triangle eyes isn’t going to cut it in my ‘hood. You have to have a minimum of three creatively carved spectacles. Each house tries to outdo the next and the decorations are often quite frightening to the younger trick-or-treaters (I’ve had to carry more than one of my kids up to doors for candy because they were terrified).
It could be that I’m feeling so down on Halloween this year because I’ve been sick for 3 weeks and don’t have the energy to fake it anymore. I also have one kid home sick from school today of all days. Which reminds me of a Halloween two years ago when my son came down with H1N1 the day before trick-or-treating. Thankfully he had picked out a surgeon costume weeks in advance. Grabbing a surgical mask from the emergency room that morning, he was good to go, nary a germ being spread to friends and neighbours.
Perhaps another reason for my negativity is that my next-door-neighbour and dear dear friend, Allison of Radishes & Rhubarb, moved to Hamilton in the summer. As much as I dread Halloween, if I had her in the trenches with me- glass of wine in hand- it was nearly enjoyable. We always planned to share a family meal with my three and her two little ones before we rounded them up for the obligatory neighbourhood candy-crawl. It’s just not the same without her.
So I’ll suck it up and the kids will get out there tonight, filling their bags with cavity-causing candy (from which I will have to carefully remove anything not clearly marked “peanut-free”). And on Saturday, as is our tradition, all candy will be dumped onto the kitchen table and the kids will be instructed to eat as much as they can (the remainder going to my husband’s workplace or to my 20 year old niece). After about twenty minutes, they will stop, declaring Halloween over for another year (thank goodness!). Maybe next year with a little more planning and energy, I’ll get into the spirit.


p.s. I do love Christmas!! Apparently there are 55 sleeps until Christmas Eve...
Image: © Darryl Brooks | Dreamstime.com
Posted by Treva Thompson at 14:06 2 comments