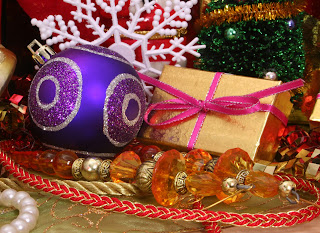 My children informed me this morning that there are only 25 sleeps until Christmas. 25 sleeps. 25 SLEEPS!!
I have a confession to make: I’m way behind my schedule of finishing all of my holiday preparations by December 4th (see this post).
Okay, I’m way ahead of any schedule that I’ve had in previous years. Just last year found me scrambling at the malls on December 23rd and wrapping gifts way into the wee hours of Christmas Eve. Our lights were put up only 5 days before the big day. If I put it in those terms, I can feel somewhat better about letting myself (and my readers) down a bit with my ambitious timeline for this year.
Here is what I’ve accomplished so far:
What needs to be done:
So enough writing already. I’ve got work to do! I hope that the rest of you are having luck keeping to your Christmas pledge if you took it. Let me know! I’d love to be inspired by you.
Image © Lori Martin | Dreamstime.com
Posted by Treva Thompson at 09:40 0 comments

Trials and Triumphs of a School Lunch 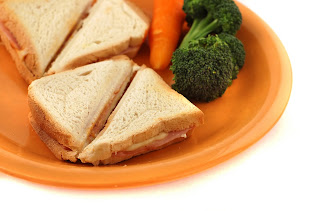 Do you realize that between grades 1 and 8 there are approximately 4500 lunches made and packed for three kids who eat at school?

One of my resolutions for this school year is to get the kids to make their own lunches. I am hoping that this will teach them responsibility- and that they might even eat all of their lunch if they pack it themselves. This isn't working exactly to plan but we have made some breakthroughs:
Baby steps mean progress in our house. Someday in the not-so-distant future I see them planning, preparing and packing their own lunches. Until then I’m happy with the direction in which we’re headed.
Bon appetit!
Image © Tomas Loutocky | Dreamstime.com
Posted by Treva Thompson at 10:02 0 comments 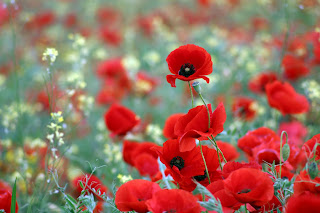 Last year just before Remembrance Day I came across a website called The Poppy Project. The researchers of the Poppy Project have created a map of Toronto with a poppy indicating every house that lost a member in one of the World Wars. The image is striking. The poppies clutter the map like blood stains, reminding us of the sacrifice that so many young men made for our country.
On a whim, I zoomed in to my street and noticed a poppy. When I clicked on it I saw that the only house on our street to experience such a loss was ours. A 26-year-old man lost his life during WWII. He was a volunteer with the navy. In 1944, his ship, the HMCS Valleyfield, was torpedoed by a German U-boat in Canadian waters just off the coast of Newfoundland on May 6, 1944. The torpedo caused the ship to split in two and it began to sunk immediately.
Here is a description that I found at the Naval Museum of Manitoba’s website:
“As the ship was sinking, most of the ship’s crew entered the ice-cold North Atlantic water, which when measured in the last watch, registered a temperature of a mere 32 degrees Fahrenheit. In addition, oily water choked the survivors, as they huddled together, helping each other to survive. Some clambered on top of wreckage, or clung to carley floats. Others remained in the water, buoyed by the life jackets.
Now that the ship had completely sunk, they found themselves alone, with their escorts virtually unaware of the deadly occurrence astern. Finally, HMCS GIFFARD, realizing that the VALLEYFIELD was missing, came to the scene to rescue survivors. However, as was the doctrine at the time, the rescue did not begin until she had spent valuable time searching for the u-boat which had caused the tragedy. By this time many men had given up, let go their hold on Carley floats or wreckage and sank from sight. A total of 125 men perished that night, all within the coastal shores of Newfoundland.”
One of those men who died was the man who lived in our house nearly 70 years ago. This young man died at sea and his body was never recovered. He left behind his parents and his young wife.
Reading about the sacrifice that this young man made for our country and for our freedom left me imagining the moment when that terrible telegram was delivered to this very door. The tragedy is profound, the sense of loss almost tangible. Within these walls, his wife wept for her husband and mourned his death. His parents, who also lived here, comforted her while coping with their own loss. His father had fought in WWI. He knew too well the realities and horrors of war. He survived to lose his son to another terrible war. That son died so that we could be free.
Today I will solemnly and respectfully wear my poppy. I will attend a Remembrance Day service as I do every year and I will think of this young man. I will think too of both my grandfathers and my father-in-law who all fought in Europe during the Second World War. I will think of the horrors of war and the courage of those soldiers to fight for what they believed in. I will speak to my children of the sacrifices that people have made and continue to make for our peace and for our security each and every day, that we don't take them for granted.
And we will never forget.
Image © Fesus Robert | Dreamstime.com
Posted by Treva Thompson at 00:03 0 comments

Turning Over A New Holiday Leaf 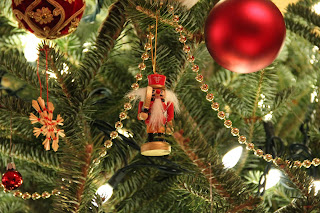 51 sleeps until Christmas!
After this week’s negative Halloween post, I’d like to switch gears and tell you that I can’t wait until Christmas! I know some people out there are already getting stressed out about getting it all done with some shred of sanity left for New Year’s. I never get stressed in November about Christmas. Perhaps it’s because I have a warped sense of how much time remains until the big day. One week before Christmas, you will find me weeping in the fetal position in a corner because I’ve left it too long, vowing that NEXT year it will be different.
Worse than the panic on December 17th is the January freak-out. You see, we celebrate both “Canadian” Christmas on December 25th at my folks’ place and then we do it again on January 7th when we celebrate Orthodox Christmas with my in-laws. Some of you might think this is an ideal scenario. No arguments over holiday logistics every year- Christmas Eve here, Christmas Dinner there, etc. But now I ask you to consider the inevitable: Every year, we wait to buy gifts for Orthodox Christmas until Boxing Week. In our minds, the reasons are twofold: one, we get the great deals and two, we can get the gifts that the intended recipients didn’t get on the 25th. Now imagine shopping during Boxing Week for that specific item that will always be sold out in the size that you want after you’ve spent an hour finding a parking space at the mall. And on January 6th when you’re wrapping the gifts last minute, you try to find another roll of wrapping paper because you’ve run out. Seriously, try it this year. Sometimes, Orthodox Christmas gifts end up in birthday wrapping paper because that’s all I have.
This is not new for me. I honestly think I could win an award for being the world’s biggest procrastinator. All of my papers in university were completed the day of the due date. The night before an exam would find me playing Solitaire for hours and then staying up all night to study. It’s a wonder that I completed my honours degree at all, let alone with decent marks. I always have great intentions and am highly organized. I can make a great plan to get things done in advance and everything does get done - but always at the last minute.
Today, I was inspired by blogger Karen at The Art of Doing Stuff who is making a pledge to be completely organized for Christmas by December 4, in exactly one month. So here and now I am joining her in making a public pledge to all of you that I will be organized and I will get most of my holiday preparations completed by in the next month. And if I say it here, I have to be accountable. I will give you a progress update and see if I can do it.
What does this mean in real terms? Firstly, I will delegate some holiday duties to my husband instead of trying to do it all myself (control freak, anyone?). Next, I will start my gift list today. It will invariably be altered and corrected many times due to the kids’ ever-changing whims about what they want Santa to bring. When they arrive home from school today, I will have set out paper and pencil for them to start their lists. With my mother visiting next week, I will have good company to get out there and get shopping. I have marked November 15th as the day the lights will be put up. Christmas cards will be designed and ordered by November 7th and mailed by December 2nd. The house will be mostly decorated by December 4th. The tree will be up and decorated by December 13th (after my deadline but remember that it has to last until January 7th).
After December 4th, I plan to relax for the remainder of the holiday season, spending good quality time with my family and friends, cooking great meals, baking holiday goodies, volunteering with the kids at the local food bank, attending holiday productions like Messiah and the Nutcracker and generally enjoying myself and the magic of the season.
Cheers!